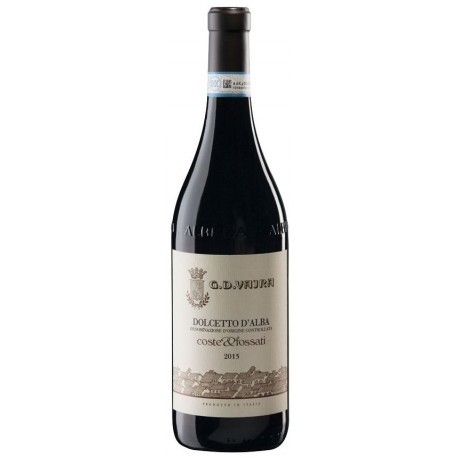 Coste & Fossati® is a selection of antique biotypes of Dolcetto, selected by Aldo between 1978 and 1985, and grafted in two of the best vineyards of Bricco di Vergne in Barolo. These plants with a “red stalk” create a limited production of an intense, noble and spiced Dolcetto

This wine owes its name to the two vineyards where we harvest its fruit from: Coste di Vergne and Fossati, both in the town of Barolo with altitudes ranging from 400 to 480 meters. Coste is facing South-West whilst Fossati faces South-East, like the sides of a ship they share the composition of the soil, characterized by Sant’Agata fossil marl with veins of the rare Messinian deposits

The harvest of Dolcetto Coste & Fossati® begins when the stalks of the grapes change color to red, usually in mid-September. A delicate fermentation of 20-25 days is followed by at least two racking procedures

8-12 months of aging in the cellar before bottling

The Dolcetto Coste & Fossati® is characterized by a fascinating vibrant purple color, deep and brilliant. A symphony of red fruits, sour cherry, enveloping notes of licorice and menthol. Lively, complex and silky tannins, for a Dolcetto, which aging in the bottle, will reveal a surprising freshness

Until 2005, Coste & Fossati® was aged in Slovenian oak casks. As the vines gained age, they produced increasingly complex and balanced fruit, which suggested to the Vaira family, in recent vintages, a more neutral maturation in stainless steel tanks