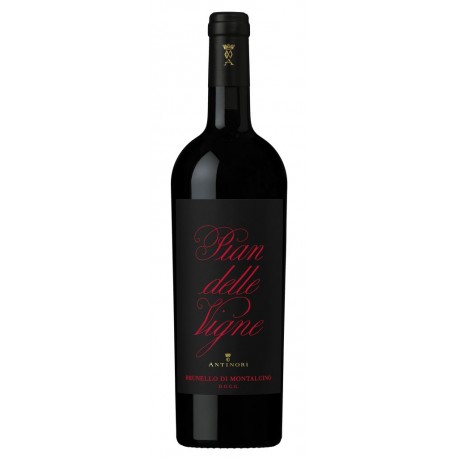 The Pian della Vigne estate, located approximately four miles (six kilometers) from the town of Montalcino, takes its name from a characteristic 19th century railroad station located on the estate’s grounds. The property consist of some 460 total acres (184 hectares), 160 of which (65 hectares) are planted to vines in vineyards with a southeastern exposure at 425 feet (130 meters) above sea level. Pian della Vigne has followed the philosophy of aging in large casks which preserves the exceptional integrity of the fruit of the Sangiovese grape and endows Brunello with its characteristics vibrant elegance. The estate has belonged to the Antinori family since 1995, the year of the first Pian delle Vigne vintage

By buying this product you can collect up to 3 loyalty points. Your cart will total 3 points that can be converted into a voucher of 1,50 €.

The winter of 2014 was characterized by mild temperatures and frequent rainfall. The growing season, which began slightly in advance, was distinguished by a springtime influence by cool weather. Summer rains and temperatures below normal seasonal averages led to a slight delay in the ripening process, a delay recovered during the first two weeks of the month of September. The improved climate of the harvest and a scrupulous manual selection assured that only healthy and highquality grapes arrived to be fermented in the cellars

Upon their arrival in the cellars, the grapes were destemmed, given a soft pressing and then went into stainless steel tanks where they went through a lengthy fermentation process. The period of skin contact lasted fifteen days and took place at a temperature of 82° Fahrenheit (28° centigrade). Given the characteristics of the growing season, the aim was to fully bring out the freshness of the fruit, the suppleness of the tannins, and the overall balance of the final wine. To accomplish this, the wine, in fact, went into 890 and 2100 gallon (3000 and 8000 liter) oak casks where it was put through a complete malolactic fermentation and began its period of oak aging. After over two years, the Pian delle Vigne Brunello di Montalcino left its casks to then go through a lengthy period of bottle aging before commercial release

The wine shows a brilliant ruby red color, and the nose is characterized by red fruit along with hints of tobacco and such spices as vanilla, cinnamon, cloves, and cardamom. The palate is distinguished by balance and finesse: soft and silky tannins, the characteristics of this vintage, sustained by an excellent freshness, capable of adding elegance and flavor grace