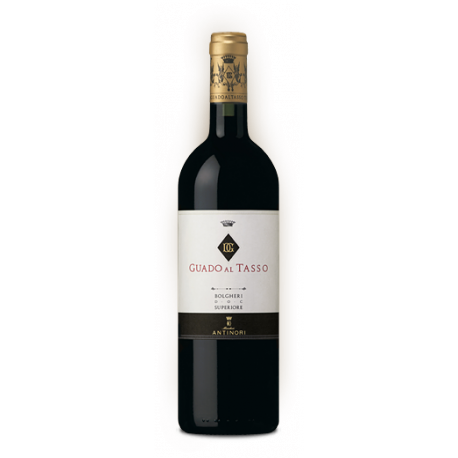 The estate of Tenuta Guado al Tasso is about 80 Km. south-west of Florence near the medieval town of Bolgheri, in Maremma, extends down the Tyrrhenian coast to the hills and apart from vineyards, other crops grown here include wheat, corn, sunflowers, olives. The vineyards are situated at altitudes between 45 - 60 metres a.s.l. on rocky, slightly limestone soil

By buying this product you can collect up to 5 loyalty points. Your cart will total 5 points that can be converted into a voucher of 2,50 €.

The 2013 vintage was, on the whole, a cool one, above all during the spring in September. The summer months, warm and sunny, but without excessively high peak temperatures, assisted in a proper, unstressed growth both of the grapes and of vine vegetation.. At the end of August, it was necessary to proceed with manual leaf removal to achieve the extract and complexity which characterize Guado al Tasso. September gave us lovely sunny days and cooler than usual nights, ideal conditions for balance between sugar accumulation and aromatic ripeness. In conclusion, a cool vintage which gave excellent fruits

The harvest began with the Merlot on September 4th and concluded with the Cabernet Sauvignon in early October. The grapes were sorted and selected twice, first immediately after picking and then after destemming, and only perfectly ripe berries went into the fermenting tanks. As in every vintage, the single vineyard parcels, subdivided into a series of small plots, were harvested and fermented separately to preserve their specific character and personality. The fermentation and skin contact took place in temperature-controlled stainless steel fermenting tanks and lasted 15-20 days. After fermentation, only superior lots went directly into new small oak barrels, where they went through their malolactic fermentation. The finest selections for Guado al Tasso were assembled and blended together after a year of aging and remained in barrel for a further six month period before bottling

The 2013 Guado al Tasso is a wine of great elegance and finesse, silkier and more vibrant than ever. In a cool vintage, one with a very long growing season, the Cabernet Sauvignon (50%) brought notes of aromatic herbs and mint along with crisp tannins which added length. The Merlot (27%) gave concentration and texture and ample sensations of plums and blackberries. The characterful Cabernet Franc (20%) contributed aromatic and flavor elegance, intensifying the finish and aftertaste with notes of liquorice and cassis. And, finally, the Petit Verdot (3%) combined very well with other varieties, underlining the wine’s spiciness