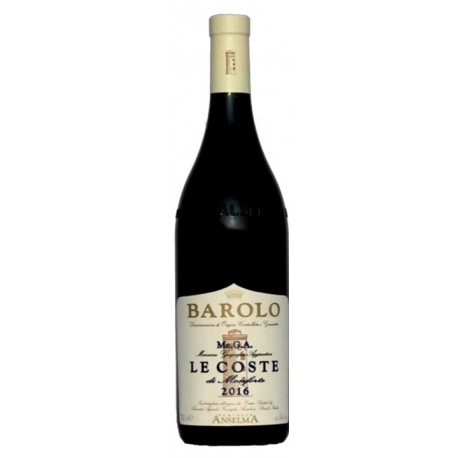 By buying this product you can collect up to 2 loyalty points. Your cart will total 2 points that can be converted into a voucher of 1,00 €.

spontaneous fermentation with grape’s yeasts for 4 - 5 weeks in stainless steel tank, according to the characteristics of the vineyard and the climatic conditions of the vintage

minimum 2 years in wood, in large Slavonian oak barrels, in the underground Cellars in Barolo

First Release on the Market

4 years after harvest, later from Anselma Library of the Historical Vintages of Barolo

LE COSTE di Monforte iis tthe Southest vineyard of the Barolo Area, where Barolo was produced since very long Time, as One of the Most Iconic Barolo, called Monfortino was born from this Menzione. From 1995 Viintage Famiiglia Anselma decided to blend it with Ravera into ADASI. Now is bottled separately, a part keeps going into the BAROLO RISERVA ADASI