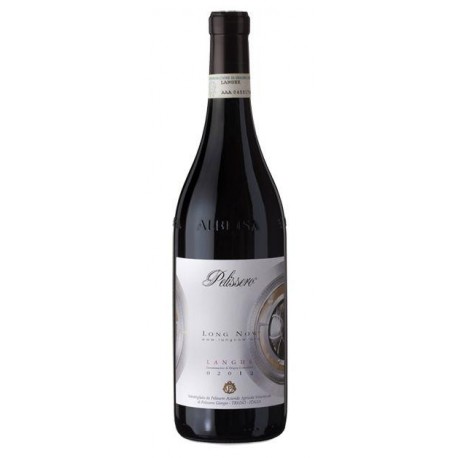 Cascina Tolino in the villages of Treiso and Neviglie

Density of plants per hectare

of medium mixture with a rich component of mineral microelements as the magnesium, calcium, iron, phosphorus and potassium

the denomination "Langhe D.O.C." embraces grape growing zones and grape varieties among the best in the world. This wine is all produced in a new vineyard bought in 1999 which is located at a short distance from the head winery on the borders of Barbaresco zone. Very steep soil, characterized by the presence of a Palm tree and, due to a matter of districts borders, only half of this land can be devoted to the cultivation of Nebbiolo for the creation of Barbaresco. In the remaining part, also suggestive and unrecognizable without the aid of topographic tools, the Nebbiolo produced cannot become Barbaresco with ageing. Therefore we have decided to blend Nebbiolo to Barbera also present in our estate in order to give life to what was the most historical blend, already very common since our grandparents' times, but undoubtedly very actual and innovative still today. The name and the label graphic express these characteristics of innovation and internationality to which the blend of these two varieties can lead to. The name "Long Now" recalls the long living concept and it is the name given by outstanding Californian scientists (the Long Now Foundation) who referred to the special clock designed on the label which is currently exhibited at the Science Museum of London

wine of innovative conception produced trying to exalt to the maximum the potentialities of these two varietals, grown from relatively old vines.
Colour and acid freshness come from the Barbera while the great aromaticity and tannic strength come from the Nebbiolo. A blend creating soft, persistent and very long ageing wines. Separate vinification for the two varieties with maceration of 10-12 days for Nebbiolo and 25 days for Barbera in stainless steel casks at controlled temperature. End of fermentation and prime decantation again in steel then in wood. Aged in small oak barrels for 15-18 months successively blended before bottling and left resting for 10-12 months in bottle before marketing. It is an important, austere wine from Langa with big potentialities

the wine colour is violet-bluish almost black and hardly transparent but also lively and particularly pleasant. The impenetrability is also perceived in the nose, with a marked varietal scent and aroma of ripe fruit, blackberry, raspberry and red cherry framing to the slightly fragrance of vanilla. The explosion comes in the mouth, where it is open, fullbodied, velvety and all-embracing. The savour and elegance of the two varietals combine excellently and appear at their best expression the pleasantness of an unforgettable taste