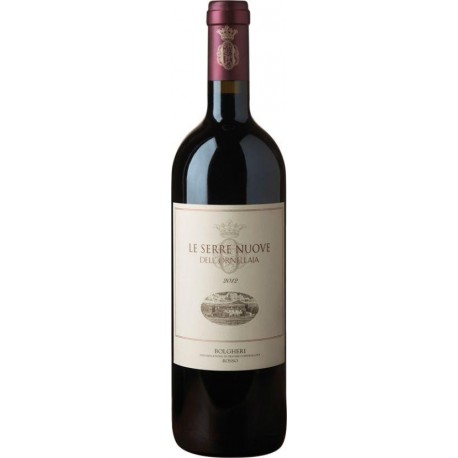 Coming primarily from the Estate’s younger vineyards and made with the same passion and attention to detail as Ornellaia, Le Serre Nuove dell’Ornellaia is a true “second vin”. A blend of Merlot, Cabernet Sauvignon, Cabernet Franc & Petit Verdot, Le Serre Nuove dell’Ornellaia combines generosity and depth of flavour with an engaging and vibrant personality

By buying this product you can collect up to 4 loyalty points. Your cart will total 4 points that can be converted into a voucher of 2,00 €.

“Le Serre Nuove dell’ Ornellaia 2015 perfectly represents its exceptional vintage, combining an ideal balance of elements in a way that rarely happens; a balance of ripeness, substance and a particular pleasantness. With an intense colour and youthful appearance, its intense and ripe fruity aroma with subtle spicey and toasted highlights are detected on the nose. Well-rounded and satin-smooth on the palate, great texture and harmoniously balanced, with a succulent fruitiness which ends with a zesty finish with no sharp edges, freshened by balsamic notes.”
Axel Heinz - May 2017

After an unusual year in 2014, 2015 proved to be a very normal wine-making year, almost textbook. After a normal winter, wet and mild but with some days below 0°, germination arrived on time during the first few days of April. Spring was characterized, by dry and sunny weather, ideal conditions for normal vegetative growth that led to quick and full flowering at the end of May. From June water stress steadily arrived. July will be remembered as particularly scorching hot and dry, with temperature highs consistently above 30°C on every single day of the month. The heat wave, together with the lack of rain gave rise to fearing that ripening would be blocked and that early harvest would be necessary. Fortunately the rain arrived around 10th August with heavy rainfall that unblocked the ripening process, bringing with it some much fresher weather during the final phase of ripening. This cooler but sunny weather lasted for the entire harvesting period, allowing us to harvest very slowly, waiting to make sure that every vineyard had arrived at the perfect point in the maturing phase, uniting a fresh and lively aromatic quality with a perfect phenolic maturity with plenty of tannins yet still silky and soft. Beginning on 29th August with the Merlot, the harvest came to an end on 12th October with the last Cabernet Sauvignon and Petit Verdot

The clusters were hand-picked into 15-kg boxes and then selected by hand on a double sorting table, before and after de-stemming, and finally gently crushed. Each variety and each parcel was vinified separately. Alcoholic fermentation took place in stainless steel, at temperatures of between 26° and 30°C for two weeks followed by maceration of around 10-15 days. Malolactic fermentation was started in stainless steel, and completed after transfer to barrels (25% new and 75% a year old). The wine remained in Ornellaia’s temperature-controlled cellar for a further 15 months. It was assembled after the first 12 months and then reintroduced in the barrels for a further 3 months. After bottling, it was aged for an additional six months prior to release