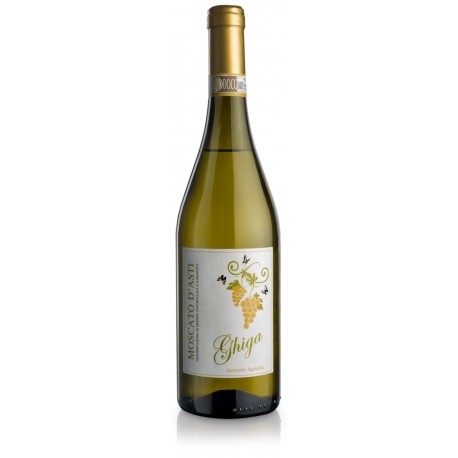 The Moscato wine has always gone very well with desserts; it’s a great combination with all pastries, biscuits and dried pasta; it is also the perfect match with some neutral and light cheeses. The Moscato wine is also ideal for flavoring ice cream and sorbets, and for preparing fruit salads, tasty cocktails and long, low alcohol drinks. The Moscato wine is traditionally the wine for toasting during the holiday seasons and feasts. It is capable of evoking joy and creating a good mood even if one is a little down. Its sweetness and fragrance make it ideal for accompanying all the happy and joyful moments of life, like birthdays and weddings. This product should be served preferably at a temperature between 5 – 6 ° C

Moscato is a sweet and aromatic white wine made from a very old vine variety of noble origins. The oldest documents that mention the cultivation of Moscato in Piedmont date back to the early 1300s. The term “Moscato” appears during the Middle Ages and its meaning is “fragrance”. Originally the word refers to an essence used in the finest perfumeries. In 1606, Giovanni Battista Croce, a jeweler at the Savoia residence and also a knowledgeable person on Turin wine, wrote “On the excellence and diversity of the wines that are made in the Mountain of Turin” and listed “the best” types of grapes in the hills surrounding the city. He highlighted the “moscatello nostrale” among the white grapes and spoke of it as being a widespread grape “known by everybody” the base of a wine called by the same name. In the 1800s, the Canelli and Asti cities became the symbols of the Moscato wine. Canelli was characterized as the historical capital of the Moscato Bianco grown in Piedmont, typically known as “Moscato bianco di Canelli”. The city of Asti has very strong wine-making roots. It is the site of important events, fairs, trade centers and studies on wine and it became a reference point for the Moscato wine. It is this city that, to date, grants the protection of the brand name and image of its patron saint, San Secondo on horseback. At the end of the 1800s, Canelli was the main cultivation area. Followed by Santo Stefano Belbo, Calosso, Strevi, Castiglione Tinella, Acqui Terme and Ricaldone. It was at this point that the white Moscato wine, depending on the type of vinification used, became the starting point for two major pathways. On the one hand it led to the birth of the Piedmont wine industry, by creating Asti, which is the most popular aromatic sparkling wine in the world. Large Piedmont spumante companies created their fame and their international success with this product. The other route taken by the Moscato Bianco led to a delicately scented wine, with slight effervescence, produced by small or medium-sized companies who distinguish their product by using the Moscato d’Asti denomination. And there is also a third route: what’s called appassimento (the withering of the grapes). The peculiarities of this vine variety make it suitable for producing excellent sweet dessert wines that are intensely aromatic, appreciated for their harmony and structure. The success of the Moscato d’Asti continues incessantly. Its image is strongly characterized by its close ties with hilly areas and with well-established small growers and companies that are committed to achieving high quality standards. After many centuries of history, the white Moscato grape variety continues to be a reference point for viticulture and enology in Piedmont. It is constantly dealing with social, economic and customs changes

Name of the product

the grapes are pressed without de-stemming, after macerating for roughly 12 hours, carried out directly in the press with enzymes. The juice obtained is then filtered and fermented in an autoclave under pressure until it reaches roughly 5 degrees of alcohol and an excess pressure of about 1 to 1.20 bar. It is then chilled to 0 ° c to stop the fermentation; this is followed by filtering, cold stabilization, a second filtration, and finally it is bottled; the must is filtered only 2 times

Length of time in wood

Minimum length of time in bottles

marl, clay and an abundance of limestone and magnesium

spontaneous grassing, cut twice during the spring – summer period and soil tillage (ripper subsoiling with 3 teeth) to a 30-40 cm depth, carried out in autumn. Limited use of herbicides and fungicides