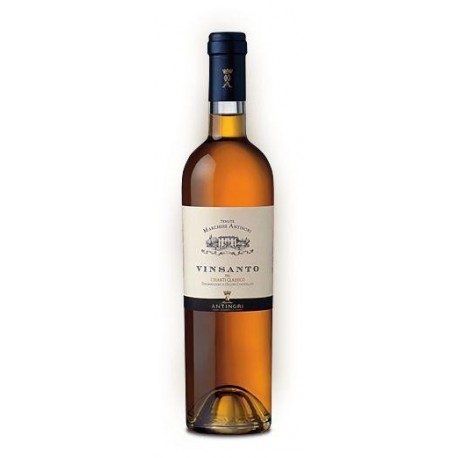 The production of Vinsanto in Tuscany goes back at least to the Middle Ages and is considered a true regional speciality; the Antinori family has, accordingly, always produced it. The first vintage of the Vinsanto Tenute Marchese Antinori (a Vinsanto produced “naturally”) was the 1987

Principally Trebbiano with a small percentage of Malvasia

After a mild winter, the spring of 2008 was marked by substantial and frequent rainfall which slowed vine growth and development without, however, creating problems for the healthiness of the grapes. A classically warm June and July was followed by a renewed period of rain in August, which assisted growth and ripening; favorable climatic conditions then returned. The harvest, which took place during the week between September 10th and September 17th, was carried out under optimally warm and dry weather. The grapes were picked into small packing cases and then dried in a specially equipped, temperature and humidity controlled facility until pressing just before Christmas

The grapes, all grown on the various Antinori properties situated in Chianti Classico, were picked at different ripeness levels: those harvested on and shortly after September 10th were crisper and fresher with their higher acidity, while those picked at the end of the week were sweeter, riper, and higher in sugar. In both cases, the grapes were quite healthy, a very important factor in avoiding problems during the subsequent period of drying. The bunches were laid out on reed mats of the Tignanello estate and dried until December 20th. After pressing, the wine fermented, slowly, and at its own pace, in 40-52 gallon (150-200 liter) barrels coopered form various types of wood. The wine aged for three years and was then blended and bottled

An intense and brilliant amber in color, the wine features nutty aromas with further notes of butterscotch, candied fruit, and sweet citrus fruit. Ample, rich, and full on the palate, the flavors recall chestnuts and, on the long and sustained finish, hazelnuts as well